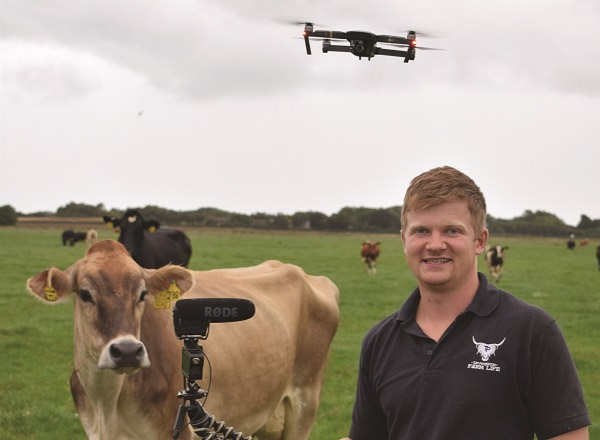 Tom Pemberton is hugely passionate about championing British agriculture, giving realistic and down-to-earth insights about family life on a farm. The result has marked the start of a digital revolution for the young Lancashire farmer.

With more than 70,000 subscribers on YouTube, last year’s winner of Digital Innovator of the Year at the British Farming Awards, Tom Pemberton, is clearly
doing something right.

After running primarily as a dairy farm for generations, Pemberton Dairies diversified in to raw milk in 2016 and it marked the start of a digital revolution for Tom.

After creating a video to show consumers how to use their newly installed raw milk vending machine, interest sparked with the footage receiving more than 11,000 views on Facebook and 500 on YouTube, all within just a two-day period.

In short, Tom has since gained an astounding following. Witnessing the effect his videos have in building a bridge between farming and the general public, he set about creating more for social media and started a YouTube channel, pertinantly called ’Tom Pemberton Farm Life’.

Described as ‘innovative’ and ‘passionate’ by last year’s judges, Tom has continued to build his digital audience and tell his farming story to the masses.

And what does he put all of his success down to? Being consistent and enjoying it, he says, with the same kind of enthusiasm he shares through his  communications.

“I have built my platform completely by mistake,” he explains. “I did not realise it would get as big as it did and I try to stay consistent with two videos a week at set times.”

“I use Snapchat, Instagram and YouTube. I also use Twitter, but I am trying to grow on this platform as it is one of my weakest areas. Snapchat and Instagram are really quick and easy to use to get videos and photos to people straight away.

“The bigger my audience has become, the more I have realised people want to know what goes on all the time. That is why my big lesson was to be 100 per cent consistent.”

And it is clear this tactic has paid off. His Instagram following has almost tripled in less than 12 months with more than 15,000 users falling in love with his Highland cattle and this year’s influx of lambs.

Tom is hugely passionate about championing British agriculture, giving realistic and down-to-earth insights about family life on a farm.

“I do not dwell on the negatives too much, which is really hard sometimes. Just enjoy it. If you are having fun doing it you will want to keep at it,” he says.

“I think it is really important to get online because people can see what is happening behind the farm gate.

“I try to make my videos explain why we do the things we do so people from outside of farming can easily understand it.

“I think there is too much bad press about farming and if I can be one of the people to show all the good things we do; I will do as much as I can.”

“It is very important for farmers to take social media head-on. I think we were slow to catch on, but we can take advantages of it now and learn from others.

“We can use it to help show the population the good we do as farmers. Be it taking care of livestock, showing how crops are grown or the work we do for the environment.

“For anyone who does not know how to get started, head to your local YFC. It is all about experience and learning as you go. Do not be scared to take that leap.”

Building confidence has been key to Tom’ success and winning Digital Innovator of the Year at last year’s British Farming Awards has spurred him on even further.

He says: “Winning my award in October last year has grown my confidence. It really makes you think you must be doing a good job. It pushes me further to keep promoting farming and the good we do.

“I get up to 200 messages a day from boys and girls interested in farming and we, as an industry, have a real chance to promote it to the wider public.

“This is a generation which will be coming into agriculture. There is a large female audience asking me what is going on because I have two sisters who get onto
my Snapchat and get involved a little bit – so girls are asking me questions too.

“The split in agriculture used to be 95 per cent male to 5 per cent female, but now the split is more like 70:30, which is great. I think this is a big part of what we do on social media.

“Anyone who says you can’t teach an old dog new tricks are wrong. My father was never interested in social media, but now he understands and responds to how it is all changing.

“These days it is easier to watch than read and farmers have never had such an opportunity to promote the amazing things they do.”

From the popularity of his YouTube content, Tom has also started his own clothing line, each embellished with a unique logo, growing his brand presence through alternative revenue streams.

With a view to promote the business even further, Tom went into schools and to family open days with calves and lambs from the farm to teach the younger generations about agriculture.

Alongside the farm shop and dairies, the family still deliver milk to doorsteps, with five milkmen out three or four times per week, plus two commercial rounds out six days per week.

Tom’s innovative way and passion for telling his farm’s story has allowed him to reach out to a wider audience and become an inspiring advocate for the industry.

Recognising the potential of digital media, Tom’s enthusiasm for the farming industry is infectious and makes him a stand out character that will continue to appeal for a long time to come.