Skip to content
Previous Next
Winners follow-up: Stephen and Iain Birnie, 2018 Machinery and Farm Technology of the Year winners 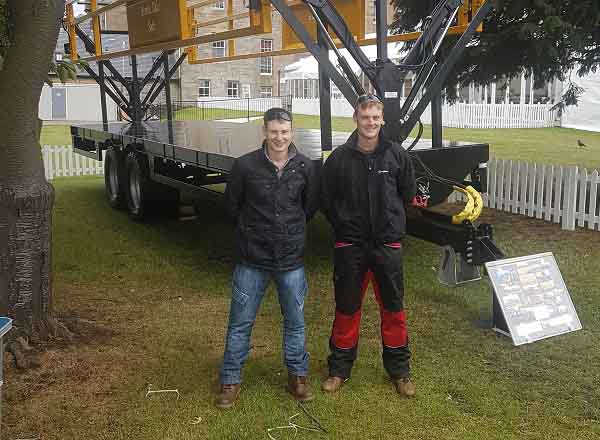 Stephen and Iain Birnie invented a trailer that has proved the catalyst to inspire a new business to run alongside their family farm. It also went on to win the Machinery and Farm Technology Innovator of the Year Award at last year’s British Farming Awards.

Two brothers from Aberdeenshire are reaping benefits from designing their own self-securing trailer which won the Machinery and Farm Technology Innovator of the Year Award at last year’s British Farming Awards.

Stephen and Iain Birnie, from Whynieton, Maud, have shown a keen interest in the agricultural industry since a young age and have always had a particular passion for technology and machinery.

As well as having full-time jobs away from home, the brothers dedicate their spare time to the family farm, which includes 60 suckler cows, 650 breeding ewes
and spring barley grown for home use. They also run their own agricultural business called SIB Services, which they established just three years ago.

It started out as a fairly low key business, hiring out a 13-tonne digger, self-drive or with operator, but since the introduction of the Birnie Bale Safe Trailer, which both the men and their dad Harry designed from scratch, the brothers have more than put SIB Services on the map.

Stephen, who is an electrical instrumentation engineer with Scottish Water, says: “Initially, the trailer was only designed for us as we wanted to improve bale transport by hauling straw in a more efficient and safe way.

“We grow our own arable crops at home for feeding, but we also have to buy-in a lot of straw, which means long trips with a tractor and trailer at nights or weekends. It is a time-consuming job when hauling from a distance, especially when you are trying to get the straps tied on a windy day.”

Admittedly, Stephen and Iain had no financial support or Government grants, so they drew up plans for the new trailer and sent them to PF Trailers, a subsidiary of Prefab Engineering based in Northern Ireland, which at the time was looking for more work to get its name in the market.

Younger brother Iain, an agricultural mechanic with Sellars, says: “Our aim was to design a trailer that would eliminate the time taken to strap bales onto a flatbed trailer and reduce man hours so farmers have more time to carry out other jobs on-farm.

“Bales are secured by a steel frame on each side which can be raised or lowered into place by hydraulic cylinders on parallel linkage arms at each end of the trailer, stopping bales from moving or falling off.”

Compatible with round or square bales and believed to be the only bale trailer on the market that can transport three layers of bales without straps or ropes, thanks to vertical hydraulic side extensions, the trailer can also be used to transport the likes of seed and fertiliser bags. The vertical extension can also be flipped upside down and used to secure lower loads, such as potato boxes.

This hydraulically controlled piece of kit means nobody has to be near the load to secure it, and securing the load hydraulically only takes a matter of seconds. When unloading from one side of the trailer, the far side can be left in a raised position to prevent loads being accidentally pushed off.

For safety, the hydraulic mechanism is held in place via pilot-operated check valves, which also allow the trailer to be unhitched, even with the hydraulic cylinders pressurised.

Each side can be independently controlled, via two double-acting spool valves. A further hydraulic service is required for vertical extensions and they come standard teed with both sides on one service and both extensions on a second service.

Stephen says: “The first trailer manufactured was used at home and we then hired it out to a customer who ended up buying it for hauling palletised Christmas trees.

“We have sold a number of trailers in the last three years, with the furthest having gone to a farmer in Sweden.

“They seem to prefer to have bigger models at 33ft, whereas here, field gates are often too small for trailers that size.”

Fortunately, the Birnie brothers have had to do little advertising since the launch of the trailer and have relied on the power of social media and YouTube to promote their product.

Stephen says: “We have had people from Ohio, France, Iceland, Spain and Germany get in touch about the trailer and that is all through sharing videos and pictures on Facebook or YouTube.

“People have actually followed us down our farm road when they have spotted us out hauling straw with the trailer. The interest has been phenomenal, but it is getting farmers convinced to try something new.”

“People have actually followed us down our farm road when they have spotted us out hauling straw with the trailer. The interest has been phenomenal, but it is getting farmers convinced to try something new.”

The biggest issue, however, is the time it takes to make the trailers and the cost of shipping them from Northern Ireland.

In a bid to cut costs and speed up the production process, Stephen and Iain looked at fitting all lights and hydraulics themselves, as well as painting, but
unfortunately it does not seem possible.

They are still hoping to have trailers shipped as flatpack to reduce costs and minimise the risk of trailers being scratched or damaged.

Since using PF Trailers as their manufacturer, the brothers have become part-time salesmen for the firm, selling multi-purpose trailers.

So far, they have managed to sell all types of different trailers in the area. The brothers are also kept busy selling, repairing or fitting LED lights to trailers, and they also make decorative stainless steel light bars.

Stephen says: “Due to the change in legislation and plastic now being recycled, we knew there would be a market for PEL balers on farms. After a lot of research, we felt this type of baler was the most cost effective for waste storage and haulage for ourselves.

“Not only does this baled solution keep waste clean, compact and free of vermin, but bales are also stackable for storage. There is no virgin plastic used in the baling process, which allows this system to be completely environmentally friendly.”

The brothers use the PEL 200TR model, which is the smallest tractordriven baler in the range and, when cutting net or black plastic from bales, it goes straight from the bale into the baler to make it a more user-friendly job.

And while Stephen and Iain have sold several PEL balers to farmers all over Scotland, they recently became agents for Dooley Trailers, selling grain and silage trailers.

Likewise, with the Birnie Bale Safe Trailer, the brothers believe it will take time to convince farmers to shift from using common brands of trailers to the likes of Dooley models, but they have every bit of faith they will sell well further down the line.

On winning at last year’s British Farming Awards, the brothers are proud to have been recognised for their collaboration.

Iain says: “We were absolutely over the moon to win the award and we could not quite believe it. The agricultural industry is always changing and we continue to push ourselves to develop new ideas which will help farmers in the long run and progress our business.”