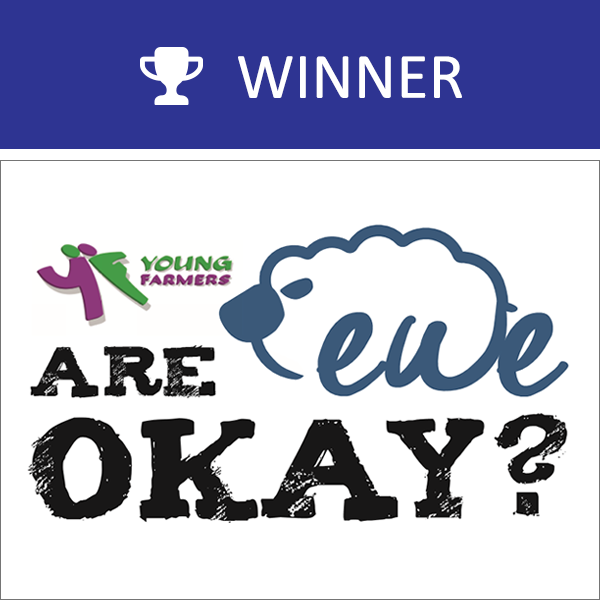 WINNER FOR FARMING HERO
OF THE YEAR

The winner of this year’s Farmers Guardian Farming Hero award was the Scottish Association of Young Farmers’ Clubs ‘Are Ewe Okay?’ campaign. Following research that nine out of 10 young people will suffer from mental health issues, the rural organisation launched a campaign to encourage conversations between their 3,500 members and break the stigma so often surrounding mental wellbeing. What was originally a 12-month campaign is now a long-term project with a dedicated social media day promoting health triggers, recognising the signs and how to seek help if someone is suffering. A go-to area on the website featuring a host of information has proved popular and members have also been busy fundraising for their partner, The Scottish Association for Mental Health, and to keep the campaign going.

Campaign Manager Joanna Foubister said: “It is a phenomenal honour to win the Farmers Guardian Farming Hero award and to be recognised for the ‘Are Ewe Okay?’ campaign.

“We know one in four people in Scotland will suffer from poor mental health so we predominately launched the campaign for our members.

“But, through this fantastic opportunity and exposure from this award, it will enable us to reach a greater audience and ultimately spreading awareness of the cause is one of our key objectives. It is truly appreciated.”

On winning the award, The Scottish Association of Young Farmers’ Clubs said: We are extremely proud to receive this award after all the hard work everyone in the team has put in. Mental health can be such a prevalent issue within the farming industry, especially among the younger generations. Whether it is the weather, finances, or just dealing with the turbulence which comes with being a young person, the pressures placed on individuals within the sector can be immense. We are proud to offer support to those 14 – 30 year old’s who require it.