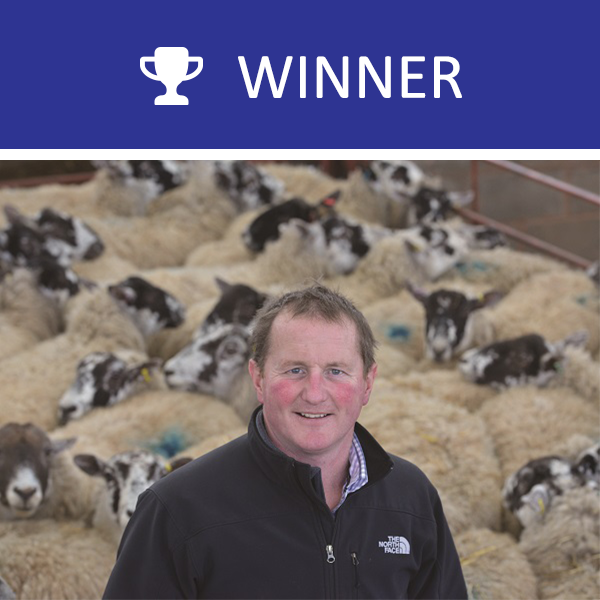 GOLD WINNER FOR SHEEP INNOVATOR
OF THE YEAR

MAKING radical changes to simplify systems, introduce technology and save labour have resulted in both improved profitability and animal health and welfare for Sam Jones who runs the 205-hectare family farm near Redditch, Worcestershire. The business is currently taking in part in Challenge Sheep, an AHDB project to understand how the rearing phase of replacement ewes impact lifetime productivity.

Ten years ago they were running 2000 North Country Mules, but Sam took the decision to reduce this to 1200 and has seen a flock health soar and a big reduction in vet bills as well as an increase in productivity.

Replacements are bought as lambs from Bentham market and are all put to the ram as lambs achieving a 135-140 lambing percentage. However, as a biosecurity measure they are kept apart from the main ewe flock for 18 months.
Lambing takes place indoors for three weeks from mid-March and a team of vet students is drafted in to help. Ewe lambs are sold privately off farm and male lambs go to Farmers Fresh at around 45kg (21kg deadweight).

Grant aided investment in an automatic weigh scale with shedding gate has saved hundreds of hours in labour as has a three-in-one feeder. A sheep spray system rather than using a pour-on for flies has reduced cases of fly strike to just two cases a year.

Sam also plans to drastically antibiotic use on-farm. Historically, all lambs had been injected with 0.5ml of penicillin at birth but this has been halved and he also intends to stop blanket treating ewes with antibiotics for abortion just before lambing and use vaccinations instead.

Every technology introduced to the farm is designed to reduce costs, improve efficiency and ultimately safeguard the future of the family farm.

The judges said about Sam: The innovations Sam has implemented  are both technical and well established. Sam has made decisions which have improved profitability, animal health and welfare, including responsible use of medicines. His enthusiasm for his farm and his confidence in embracing change is refreshing and reassuring.

On winning, Sam said: “We work so hard to try and be more efficient. We embrace technology and try and be as progressive as we can be and feel very privileged to have won this award.”