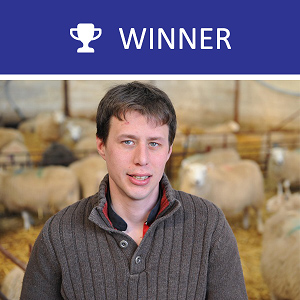 GOLD WINNER FOR NEW ENTRANTS AWARD: AGAINST ALL ODDS
OF THE YEAR

Harking from a family of teachers, Rhidian began his career in agriculture as an animal feed sales representative, however his dream was always to become a farmer. In 2008, Rhidian started out by renting nine acres of poor grazing land for 15 Welsh Mountain ewes, and followed by taking on any grazing land which became available in the local area.

Throughout his time within the agricultural industry, Rhidian has been involved in many programmes outside of farming, and taken every opportunity to be involved in farming’s wider community. This includes being former chairman of his local Young Farmers Club, and a member of Farming Connect’s, Agri Academy, Business and Innovation programme. As well as this, he also holds the secretary’s role for Bro Ddyfi Grassland Society and the role of treasurer for the local agricultural show.

Rhidian secured a 10 year farm business tenancy on Rhiwgrifol, a 530 acre hill farm and also holds an 11 month grazing license on 160 acres, five miles from the main holding. The flock has now grown to 850 ewes and 250 replacements.

Fat lambs are sold deadweight into Dunbia on Sainsbury’s YFC and Taste the difference Schemes. Rhidian runs a flock of Welsh mountain ewes half of which are crossed with Aberfield rams and breeding females are sold at a premium. Rhidian has also focussed on improving overall efficiency of the flock and has started performance recording in order to maximise production and add value to the breeding stock that he sells.

A new heifer rearing enterprise has now been added to the business, receiving batches of 110 calves, and rearing them for 17 months, meaning there are 220 cattle on the farm at any one time.

Rhidian sees a future without support payments as a challenge for keen, driven and hardworking farmers to flourish and grow viable businesses. He also intends to increase his use of rotational grazing to help improve the profitability and productivity of his land, this would include the introduction of his own herd of cattle.

The judges said about Rhidian: Rhidian had a well-thought-out plan. He had made the right connections through employment and Young Farmers and continues to do so. Networking has opened opportunities such as heifer rearing, looking outside the farm and engaging with new ideas. He has worked hard to get to where he is today and does not take anything for granted, instead challenging himself as he goes and listening to his strong support network.

On winning, Rhidian said: “I am over the moon for everybody that has helped me. New entrants bring new ideas to the pot but I have also listened to the experience and knowledge that has been shared with. Agriculture is a brilliant industry to work in – it is diverse and every day is different. It has been a very long journey but it really has paid off.”