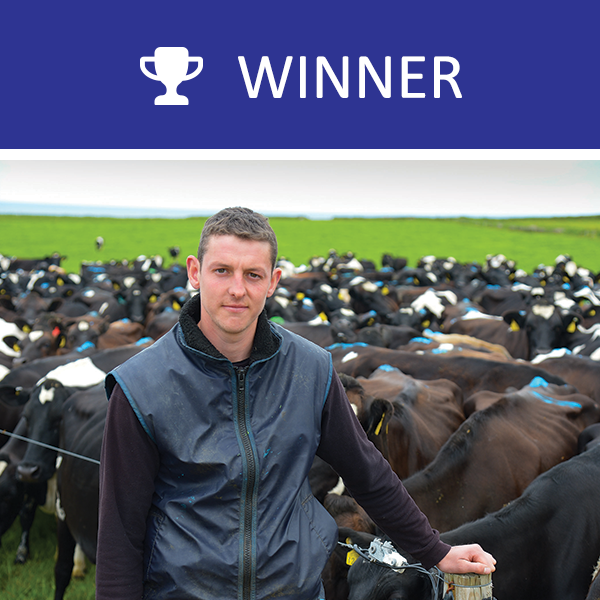 WINNER FOR NEW ENTRANTS AWARD: AGAINST ALL ODDS
OF THE YEAR

Having visited the Lleyn Penninsula on family holidays as a child, Matthew Jackson was drawn to the outdoors and working with animals.

At 15 years old, Matthew left school, and his home of Manchester, to work on farms in the North Wales area.

He worked on a beef and sheep farm, just two miles from the farm he runs and lives on today, with partner Marni and their two young children.

In 2009 aged 21, Matthew bought 20 heifer calves with his wages, and later bought and leased out in-calf heifers to retain equity while still having an income, allowing more stock to be purchased. He built his own numbers up to 220-head by August 2013, funded again by his wages and a bank loan of £30,000.

Travelling to New Zealand to press wool for a shearing contractor, he returned to work on three different farms, living out of a ‘shack’ and travelling between jobs on a 50cc scooter.

One of these jobs was relief milking 1,000 cows on a dairy farm owned by David Wynne-Finch, who later offered Matthew a full-time job as a junior herdsman, on the condition he travelled back to New Zealand to spend six months milking and learning about the grass-based system.

In 2014 the pair entered into a 50:50 share farming agreement with David owning the site and Matthew owning the stock. They have grown from 300 milkers to 400 this year on a twice a day system on the 92-hectare (227 acre) unit.

Matthew’s key focus areas are in soil and grass management and rotational grazing. He does not want to supplement his cows’ diets or silage additives and instead wants to improve the grass when it is growing, and act in the field.

Milking twice a day, the herd are giving 5,500kg per year as third-calvers. Their production peaks at 26 litres per day and they will give 430kg milk solids per lactation, while being paid on the milk’s cheese making qualities.

The judges said about  Matthew: At 15 years old, Matthew left school, and his home of Manchester, to work on farms in the North Wales area. He has gone to secure a share farming enterprise, travelling the world to learn best practise and implementing them within his own business. A hugely talented, committed and inspirational example of why you can enter farming as a new entrant and excel.