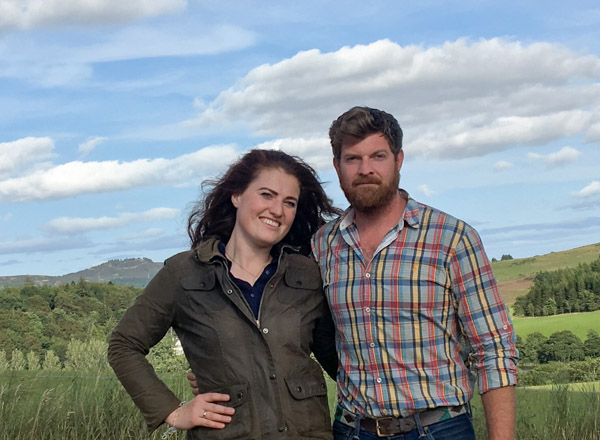 FINALIST FOR NEW ENTRANTS AWARD: AGAINST ALL ODDS
OF THE YEAR

Determination and persistence is something Nick Langston-Bolt and Lucy Eyre have in droves, which has gone a long way in getting their farming enterprise off the ground close to Lundie in Dundee.

Now rearing livestock and selling meat directly to the public, it was only three years ago when the pair first got into the industry after Lucy, who is a vet, bought Nick a birthday present of three pet lambs.

After serving ten years in the Royal Navy, Nick was working in recruitment at the time and hated it, so in 2016, opted for a change of career and began working on a dairy farm on the outskirts of Dundee, a period during which the pair continued to build-up sheep numbers.

By this time, pet lamb numbers had increased to 13 and a further 50 orphans had arrived from pedigree Lleyn breeders to form the foundation of their Langston flock, which they ran on rented ground in the area.

Nick gave up his job at the dairy last year and now works as a contractor with Tayside Forestry, which he says has provided more flexibility to grow the business which Lucy also juggles alongside her full-time veterinary role.

In 2018, the pair lambed 90 ewes, which rose to 140 this spring. Lambs are finished from 12 to 14 weeks through to December, and hoggets, until May the following year to provide a year-round supply of meat for their Langston Meat boxes.

The pair have sold these all over the UK, but more recently have started taking enquiries from restaurants, as well as venturing into cattle and pig production to provide more variety for the meat box menu.

This has included five Jersey bull calves and five Oxford Sandy Black pigs, alongside eggs from their 35 heritage-breed free-range hends which are sold in an honesty box at the end of the road.

The next step for the pair is farmers markets to showcase their products, alongside expansion if they can obtain enough grazing with a focus on breeding high quality first and foremost.

Lucy says: “The Jersey beef has been incredibly popular and if we can get our product direct to the consumer we can act on any feedback we get and it also adds value which is important.”