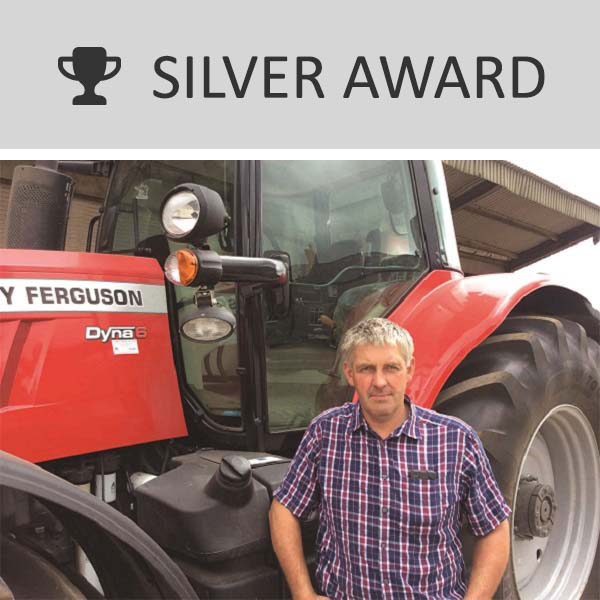 SILVER WINNER FOR MACHINERY AND FARM TECHNOLOGY INNOVATOR
OF THE YEAR

Born out of an ambition to more accurately apply nematocide at a precise depth, Lancashire potato grower Andrew Webster has created his own clever depth control system.

Inspired by height control systems as used on combine headers and beet harvesters, the depth control system uses a potentiometer which works in concert with the tractor’s hydraulics. As the potentiometer detects variations in bed height, it effectively tells the tractor to either raise or lower the bed tiller.

The bed tiller is part of a one-pass potato planting rig, created by Mr Webster, and is suspended in a frame.

Conventionally, the bed tiller would rely on depth skids. However, this can result in over and under mixing of soil. Particularly if a tiller is run too deep, over mixing can result in a lower concentration and effectiveness of nematocide, often compensated with by overdosing. Overmixing also uses more fuel and wearing metal.

Similarly, if a tiller is run too shallow, the nematocide will offer little protection if it ‘misses’ the root zone.

Trials began in 2014 with a prototype machine, fitted with a manually controlled depth control system, but this proved too taxing to operate. To eliminate this, an automatic version had to be created, which also required a one-pass planting rig to be built.

To help with this, particularly machine inter-communication, Mr Webster travelled to Massey Ferguson’s French headquarters in Beauvais to work out how to turn the signals from the depth-measuring potentiometer into a hydraulic action.

Mr Webster says; “A big challenge was the calibration of the electronics. Once solved, this allowed us to set a working depth, with the electronics and hydraulics working automatically to maintain this.”

Now, by applying the nematocide right at root level, Mr Webster can drop his dose rate from 30kg/ha, to 20kg/ha, and still maintain the same effectiveness. It is also hoped, the potato crop rotation can be increased.